PITCALC is a computer program devised in the 1980's to assist Maldon Archaeological Group on a big gravel pit rescue project around Lofts Farm, Great Totham. The pre-satellite GPS technique, enables individuals to take accurate site location measurements in seconds. The program and our experiences with site planning may still be of help today, especially to those faced with similar problems in the field.

The most expensive item required by the Pitcalc technique is a suitable dumpy level or theodolite. Fortunately they are reasonably common instruments and a sympathetic local Authority or surveyor may well be able to help out. The Sinclair Spectrum was used because, at the time, it was the UK's most accessible home computer. Now a choice of PC Spectrum emulators can be downloaded from the Internet.

Maldon Archaeological Group hoped that the success of the PITCALC program would provide finance to extend the use of home computers to include many other aspects of archaeology. In practice planning on an archaeological site is an experience similar to bicycling on a journey one has only driven along before ie. in practice a lot harder than in theory. Most obvious difficulties are perhaps those related to our climate such as rain, wind and cold, however, if the site is large and a busy working gravel pit and ones presence on site is limited to short visits then one quickly encounters other problems.

PITCALC is an adaptation of a surveying technique which overcomes such difficulties and can give very accurate results with a minimum 'on site' effort.

We have found a conventional grid system is impossible to maintain over a large area criss-crossed by earth moving machines. Hedgerows and 'established' boundaries are often obliterated in minutes. Sometimes 300 metres of gravel pit and a 60 metre wide lake may lie between a newly discovered feature and a reliable reference point. Conventional methods of using 30 metre tapes or plane table would be very time consuming and probably very inaccurate. 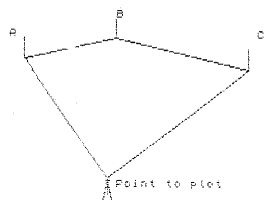 Our PITCALC method is to place a dumpy level over the feature to be plotted and take at least three 'bearing' readings to known reference points around the site. The bearings are written directly into the site notebook with no calculations or conversions being done at the time. Thus an accurate record of a location can be made by one person in a minute or two. The PITCALC program is used to convert the notebook data into a form which can be planned when the time and conditions are not a problem. Results displayed are the distances between the sighted points and the point being plotted so that a feature is located on a site plan by striking arcs from the sighted points.

Using another part of the program these distances can be converted into X & Y coordinates which can do away with the use of a compass and allow accurate large scale plans to be drawn leaving out the sighted points altogether. This is particularly useful if sighting to distant features such as pylons or church spires. We have used telegraph poles around the site but would suggest that more accurate and consistent results can be obtained by marking these objects with a precise line. Ranging poles would be good from a theoretical point of view but in practice tend to 'move' around!

Since the accuracy depends on the reliability of the sighted point distances it is important to determine them carefully. One quick method is to set up a very accurate baseline towards the centre of the site and then take bearings from each end of this to all the sighted points and the baseline itself. Another section of PITCALC that deals with triangles can then be used to find the distances between the points. This process need only be done once although we would suggest that it is useful to maintain the baseline if possible.

The co-ordinate conversion, triangle and ring ditch calculations included on the tape could be of general assistance to any site planner not involved with actual PITCALC measurements.

The tape and instruction booklet were originally available for £6.00 (inc P & P) and about 20 copies were sold to groups and individuals across the UK.

Both these originals can now be downloaded free from this site.