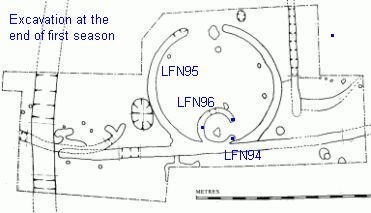 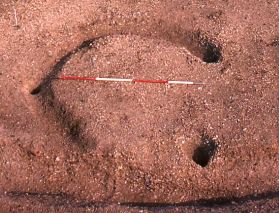 Despite the best efforts of dedicated volunteer diggers and a brilliant director it was not possible to be certain of a sequence for these three intersecting features. Future specialist study of the pottery finds may help in this respect. The plan above was drawn at the end of the first years season and shows the small ring ditch LFN96 to be later than bigger ring ditch LFN95.

A Sequence of Sorts

Initial interpretation is that the larger ring ditch LFN95 was first. The LFN95 trench represented a foundation trench for an upright timber round house wall. Being harder to see in the subsoil than other Lofts Farm ring ditches suggests the trench was filled-in when the hut was dismantled rather than being left to silt up in the weather. Next came small ring LFN96 and straight wall/fence foundation trench LFN94. No distinction was noticed in the two fills so perhaps these two features were contemporary. 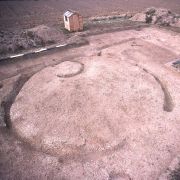 So the answer to this page title is probably no - not a hut in a hut.

If LFN96 was indeed a hut it would have enclosed a very small volume - not a great deal more than a modern 6x8 garden shed.

Perhaps it had a purpose associated with the adjacent enclosure fence LFN94. If contemporary then they would have supported each other.

Someone else must have spotted a similar small ring ditch like this.

Please visit the Pitcalc Feedback page if you have comments or answers you would like to contribute.